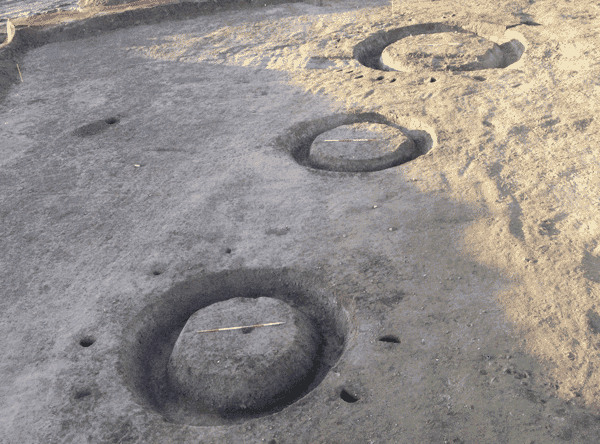 Summary: Three ring-ditches, interpreted as a Bronze Age barrow cemetery, and a large ditched enclosure of likely medieval date were excavated at East Linton (NGR: NT 588 771) in advance of residential development. Cremation burials were recovered from all three of the ring-ditches, from their upper ditch fills and from a central pit in one of the ring-ditches. Also mixed into the fills were sherds of pottery, a few lithics, and two stone grinders/rubbers. A large pit close to one of the ring-ditches, which may have been used to dispose of the residue ash from one or more funeral pyres, was also excavated and provides an insight into the wider ritual activity taking place on or near the site. To the east of the barrow cemetery, a meandering length of ditch is considered to be medieval in date and probably forms an enclosure. Radiocarbon determinations produced Middle Bronze Age dates for samples of cremated human bone, with charred grain producing Iron Age and medieval dates.