An archaeological excavation was carried out at Gearraidh na h'Aibhne near Calanais on the Isle of Lewis by Northamptonshire Archaeology, working for Glasgow University Archaeological Research Division (GUARD) as part of the Historic Scotland Human Remains Call Off Contract. The site, initially interpreted as a cist potentially containing a bog body, was identified during annual peat cutting. Excavation demonstrated that the feature was in fact an oval pit containing a quantity of hazel branches, capped with a number of flat slabs of Lewisian Gneiss. Several similar stones had been placed in the base of the feature, overlying more hazel branches. The observation of several branches placed vertically at the edges of the cut suggests that the wood remains may have originally constituted a wicker structure or basket. Further evidence of anthropogenic activity was identified in the form of bent and/or twisted hazel rods and cut marks on a larger piece of wood. Growth-ring analysis of the hazel pieces identified two distinct age clusters: a large group of pieces between five and seven years old and a smaller group between ten and 13 years old, indicating the hazel branches had been deliberately selected for size. Analysis of preserved botanical macrofossil remains indicated that heather type stems and Sphagnum moss might have been incorporated or deposited into the structure. Two radiocarbon dates of 1080-830 BC (SUERC-2086) and 1000-830 BC (SUERC-2087) at 2-sigma probability were obtained from two discrete samples of hazel, suggesting the structure was constructed and deposited during the Late Bronze Age. 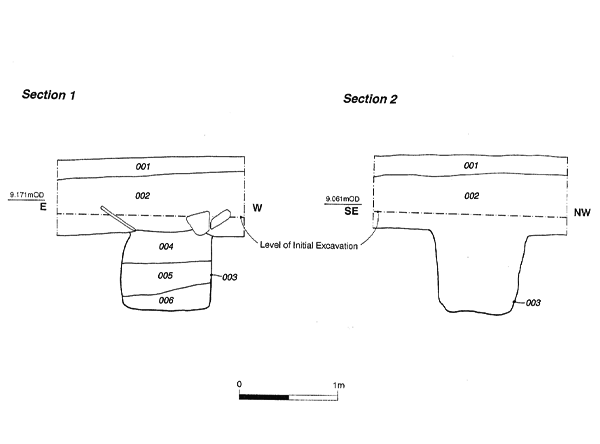