The origins of the settlements at Kelso and Peebles, Scottish Borders

archaeological excavations in Kelso and Floors Castle and Cuddyside/Bridgegate, Peebles by the Border Burghs Archaeology Project and the Scottish Urban Archaeological Trust, 1983–1994

The excavations at Wester Kelso/Floors Castle established that the original medieval burgh of Kelso or Wester Kelso was much further west than previously believed, being situated well inside the present Castle policies. That early settlement at Wester Kelso appears to have been abandoned in the 14th or 15th centuries, at the same time that the royal burgh of Roxburgh was deserted, probably as a result of the English occupation of Roxburgh Castle. The other settlement of Easter Kelso, near the abbey, survived and expanded northwards from the abbey along Roxburgh Street. The finding of a possible building terrace in Phase 1 at 13–19 Roxburgh Street indicates that settlement along the southern end of that street could date to as early as the 13th or 14th centuries. Combining the archaeological, cartographic and documentary evidence, it seems clear that 'Easter' Kelso, now Kelso, had expanded from the market area around the abbey northwards towards the Floors estate by the early 18th century.

The excavations in Peebles have provided important information on the origins of the settlement of the peninsular ridge between the Tweed and Eddleston Water. The results obtained from the excavations at the two sites in Peebles indicate that settlement of the ridge began in the 12th century, soon after the establishment of the royal castle and burgh by David I (1124–53). At both sites, after initial dumping of rubbish, possibly to raise the ground level to counter flooding, occupation, in the form of stone structures, can be dated to the 14th century at the latest, with probable earlier dumping of domestic refuse in the 12th and 13th centuries. The street of Bridgegate was apparently laid out in the 13th or 14th centuries when the excavated site was divided into three properties aligned on that street, two of which had stone buildings erected on them. Alternatively, Bridgegate may have been the initial focus of settlement on the east side of the Eddleston, providing the access route from the east into Old Town, where a pilgrimage centre had been established at the Cross Kirk in 1261, and the location of the tolbooth (Bridgegate Building 4) in it suggests that this street was originally more important than High Street. It is noteworthy that all eight medieval buildings excavated at the two Peebles sites were of stone construction. Peebles tolbooth, the civic centre of the burgh, is the only medieval tolbooth site in Scotland to have been excavated. 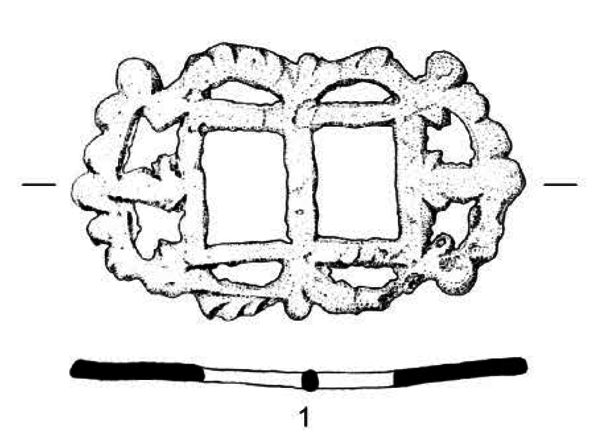