The An Corran rockshelter, on the north-east coast of the Trotternish peninsula, Skye, contained a series of shell midden and other deposits with evidence for human occupation from Mesolithic and later periods. A rescue investigation of the site in the winter of 1993-94, immediately prior to anticipated total destruction by rock-blasting for roadworks, included the excavation of a trench dug down to bedrock. A total of 41 separate contexts were identi-fied. Of these, 31 were recent or later prehistoric, the upper levels containing a series of hearths of recent date and an Iron Age copper-alloy pin. The lowest 10 layers were identified initially as Mesolithic on the basis of bone tool and lithic typology, but a series of 18 radiocarbon dates indicates they contain the residues of subsequent prehistoric activity as well. These layers consisted of several distinct areas of midden, below which there were two, possibly three, horizons which probably, based on the presence of broad blade microliths, represent Early Mesolithic activity. The midden layers also contained some human bones radiocarbon-dated to the Neolithic period. The rockshelter was located below an outcrop of baked mudstone and near a source of chalcedonic silica. Both these lithic raw materials were widely used during the Mesolithic as far away as the island of Rum. 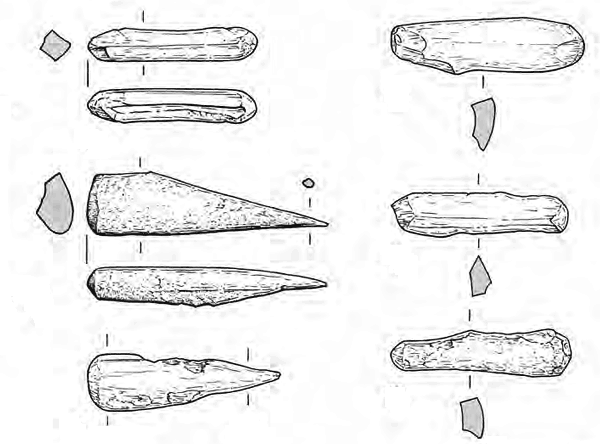