A later prehistoric settlement and metalworking site at Seafield West, near Inverness, Highland

Construction in 1996 at a major retail development site close to Inverness, Highland (NGR: NH 694 445) resulted in the destruction of two known cropmark sites. One set of cropmarks was found to be associated with a Bronze Age log-boat burial site and the results of the ensuing excavation are published elsewhere (Cressey & Sheridan 2003). The excavation of a second area of cropmarks forms the subject of this publication. The archaeological remains consisted of a series of negative features, post-holes and annular ditches which form parts of at least nine separate structures of a later prehistoric unenclosed settlement. A mould fragment indicated Late Bronze Age sword production in the vicinity. A palisaded enclosure produced a copper-alloy brooch that is a rare find for the region. Evidence of copper-alloy objects and metalworking from a smelting hearth and slags show that the occupants were of some status. Some of the structural and artefactual evidence compellingly points to an in situ ironworking workshop. A large cache of smithing charcoal found in association with a smelting hearth was radiocarbon dated to 180BC–AD70 and represents one of the few dated in situ Iron Age ironworking episodes in Scotland. 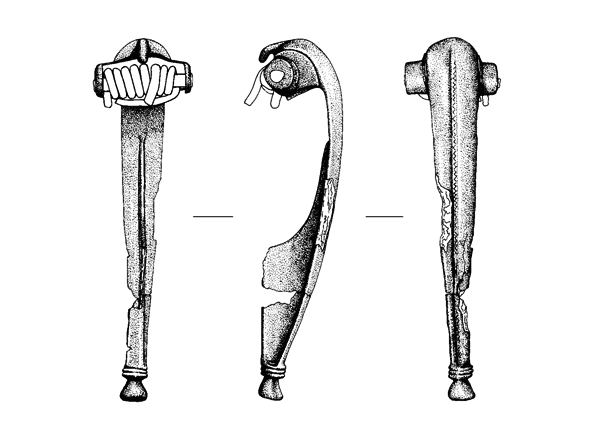