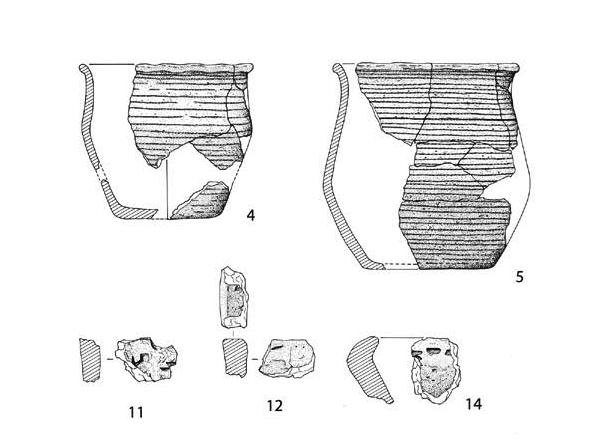 Summary: Prehistoric remains were recorded by CFA Archaeology Ltd (CFA) in 2002–03 during a programme of fieldwork at the landfill site within the boundaries of Stoneyhill Farm, which lies 7km to the southwest of Peterhead in Aberdeenshire (NGR: NK 078 409). These included a clearance cairn with a Late Bronze Age lithic assemblage and a burial cairn, with Late Neolithic and Early Bronze Age lithics and Beaker ceramics. Other lithic scatters of similar date had no certain associations, although pits containing near-contemporary Impressed Wares were nearby. Additional lithic assemblages included material dated to the Mesolithic and Early Neolithic. What may be proto-Unstan Wares in an isolated pit were associated with radiocarbon dates (barley) of the first half of the 4th millennium BC. These findings represent a substantial addition to the local area's archaeological record and form an important contribution to the understanding of lithic technology and ceramics in earlier prehistoric Scotland.

This paper is dedicated to the memory of Ian Shepherd, whose site visits enlightened this and other projects undertaken by Ian Suddaby.