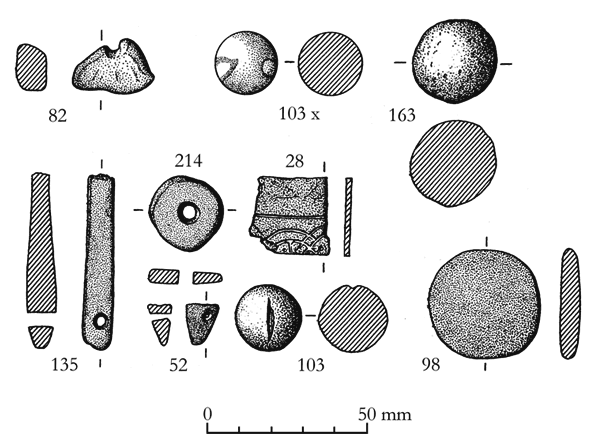 Summary: Rescue excavations in advance of gravel quarrying were carried out under the direction of the late Eric Cregeen from 1960 to 1962, at Bruach an Druimein, Poltalloch, Mid Argyll (NGR: NR 820 972). The site lies on one of the fluvio-glacial terraces which border the Kilmartin Glen, overlooking the lower ground, which has one of the densest concentrations of prehistoric funerary monuments in Britain. The site had previously been identified as containing later prehistoric and Early Historic cist burials and a degraded bank. The main features of the excavated part of site were an enclosing ditch complex, and numerous post-holes and other occupation evidence within the ditch. Possible Neolithic/Bronze Age activity was indicated by lithic scatters and possible burnt mound material. Several Bronze Age cist-burials, also uncovered during the quarrying, have already been published. The main phase of occupation, as supported by a series of radiocarbon dates, lay in the later first millennium BC, the early Iron Age period. The post-holes were interpreted as belonging to at least two roundhouses, important as the first such structures identified in Atlantic Scotland, though common in eastern and southern Britain.