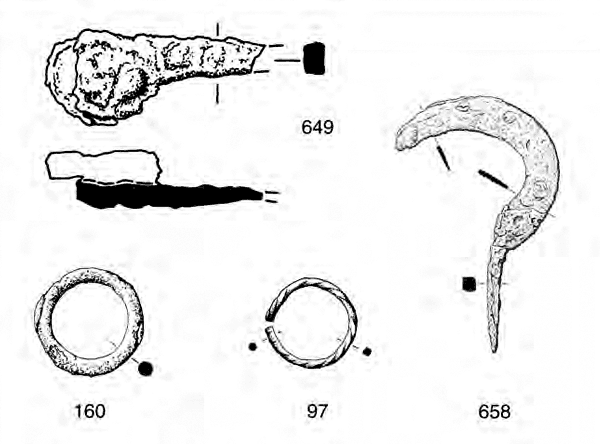 Summary: This report provides an account of the excavations of a cropmark enclosure and other prehistoric remains at Dryburn Bridge, near Innerwick in East Lothian (NGR: NT 724 755). The excavations were directed over two seasons in 1978 and 1979 by Jon Triscott and David Pollock, and were funded by the Ancient Monuments Branch, Scottish Development Department. Features and artefacts of various periods were discovered during the excavations, including a Mesolithic chipped stone assemblage and pits associated with Impressed Ware pottery. A pair of distinctive burial cists dating to c 2300–2000 cal BC was discovered, each containing two inhumations, one articulated and the other disarticulated; a Beaker vessel was found directly above one of the cists. By the mid-1st millennium cal BC a settlement had been founded on the site. Three successive settlement layouts can be interpreted from the excavated structures. The first two phases represent continuous occupation, dating to before 400 cal BC, and consisted of timber roundhouses, other rectangular structures and a small cemetery of pit graves located within a palisaded enclosure. The final occupation phase, which extended into the Roman Iron Age and may have occurred after a break in occupation, consisted of an unenclosed settlement of ring-ditch houses.