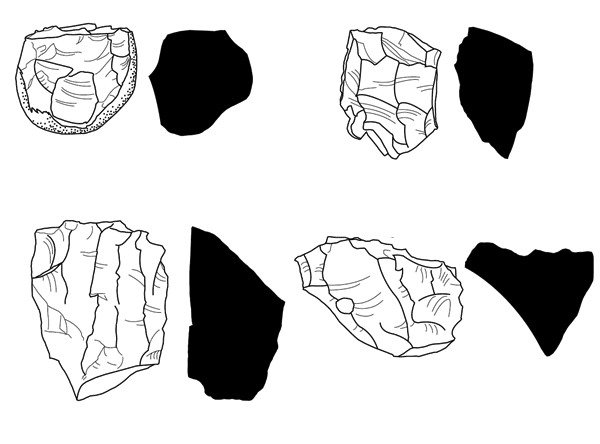 ‘A home by the sea’: the excavation of a robust Mesolithic house of the late 9th millennium BC at East Barns, East Lothian

Summary: In 2001 excavation works undertaken in advance of quarrying at East Barns, East Lothian (NGR: NT 7121 7686), revealed the substantial remains of a robust Mesolithic house structure, securely dated to the late 9th millennium BC. The house was situated within a large, natural hollow whose gradual infilling had effectively sealed the archaeological deposits. The house consisted of a sub-circular sunken floor with the remains of a westfacing entrance and two concentric angled post rings, suggesting episodes of replacement if not actual rebuilding. The remains of interior furniture were also recorded in the form of post holes, a platform, and three probable hearth features. A charred deposit of occupation debris rich in lithics sealed many of the structural features around the internal perimeter of the house. The distribution of this deposit appeared to reflect informal refuse toss/drop zones formed during the occupation of the structure and suggests some form of internal spatial organisation.

The house at East Barns joins an increasing group of substantial analogous sites related to Early Mesolithic activity in Scotland and northern England. These substantial house sites reflect increasing socio-economic, cultural and chronological complexity during the Mesolithic. As such the site allows provisional hypotheses to be formed about the scale and nature of Early Mesolithic social and economic adaptation around the North Sea Basin.