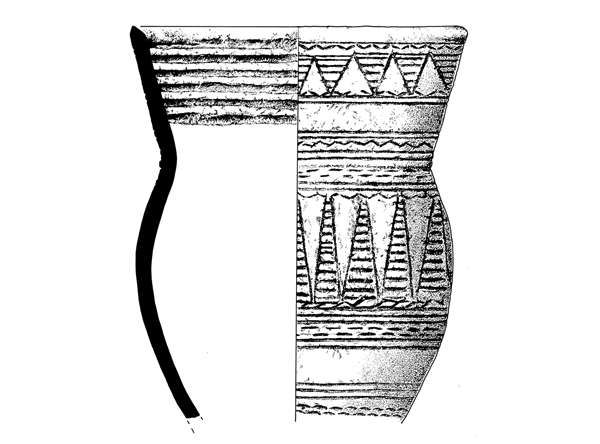 Summary: A short cist discovered during ploughing at Knappach Toll on Balbridie Farm, Aberdeenshire (NGR: NO 7369 9595) held the remains of an adult accompanied by a Beaker, fragments of a copper awl and 11 struck flints. Little survived of the skeleton except for cranial fragments, but these indicate that the person had been placed with the head to the west, with the artefacts also at that end. While the sex of the person is indeterminate, with the single surviving sexual dimorphic trait suggesting a male, the position of the body and the presence of the awl are more usually indicative of a female. Radiocarbon dating shows that the person died between 3775±35 years BP (SUERC-30852) and 2330–2040 cal BC (95.4% probability). Stable isotope analysis indicates that he or she grew up on basalt geology, like that of the region, or on chalk. Residue analysis of the Beaker has established that it had held ruminant animal fat such as butter or milk, probably for some time, and some of the flint pieces had been lightly used. The composition and constituents of the burial suggest links between north-east Scotland and East Yorkshire. They also evoke the cultural practices that were spreading across eastern Britain in the later 3rd millennium BC through the mechanisms of cultural transmission and migration.