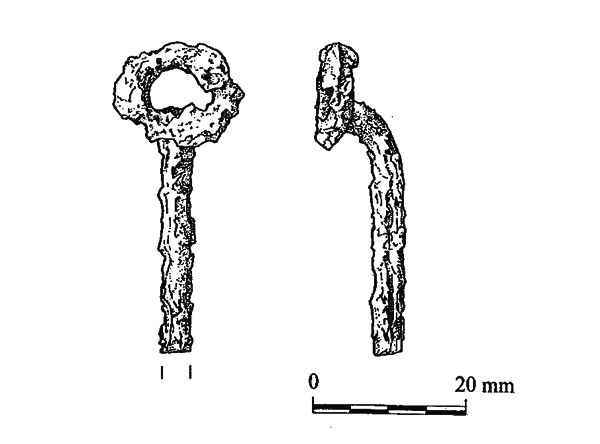 Summary: As part of the Historic Scotland Human Remains Call Off Contract, Glasgow University Archaeological Research Division (GUARD) undertook an archaeological evaluation of the find spot of a human skull from a cairn at Loch Borralie, Sutherland (NGR: NC 3790 6761). Excavation recovered the remains of two burials beneath the cairn and established that the cairn was multi-phased. One individual was an adult male (Skeleton 1), while the other was immature and of undeterminable sex (Skeleton 2). Both individuals showed signs of ill health, and dogs and/or rats appear to have gnawed their bones. A ring-headed pin was recovered close to Skeleton 1 during the excavation. A radiocarbon date was obtained from the left humerus of Skeleton 1 of 40 cal BC - cal AD210 at 2 sigma (OxA-10253). Excavation revealed that the cairn, broadly sub-rectangular in form, had a maximum height of 1.2m and was composed of large, sub-angular and sub-rounded rocks (including quartz and quartzite) and occasional rounded cobbles within yellow-orange sand. One inhumation, Skeleton 2, lay within an irregular grave, cut through the red brown sand that was sealed by the cairn and into the natural gravel sand below. The other inhumation, Skeleton 1, was sealed by the red brown sand and had been placed on a low primary cairn of stone and earth, the full extent and depth of which remains unknown. The tradition of extended inhumations within sub-rectangular cairns is a recognised funerary practice in the north of Britain during the first millennium AD. Many of these burials are generally considered to be Pictish in date, but Loch Borralie indicates that the tradition commenced in the Iron Age. There is increasing evidence for the variety of ways in which human remains were treated after death in the Iron Age, including cremations in re-used cists, single inhumations in graves and cists, multiple inhumations and the incorporation of human remains in 'domestic' contexts. The results of the excavation of the burial mound at Loch Borralie provide a useful addition to the range of mortuary and funerary rites which were practised during the Iron Age in Scotland.