excavations at Loch Shurrery and Lambsdale Leans, Caithness, 1955, with a note on Lower Dounreay

Two rescue excavations at the northern edge of a rather sparsely occupied part of the interior of Caithness are reported here, Loch Shurrery (NGR: ND 043568) and Lambsdale Leans (NGR: ND 051548), lying near to one of the largest clusters of archaeological sites in the modern county. In the event, the monuments were not threatened, and survive. Because of the limited nature of the excavation at Loch Shurrery, the main value of the evidence about the hut circle relates to its structure and dating. The excavated remains represented a medium-sized oval house with a west-facing entrance. It had an off-centre hearth of rectangular construction. It was rather different in structure to the majority of the small group of such sites which have been excavated in the northern part of the Scottish mainland, as it did not appear to have an internal ring of post holes. In addition, its western entrance is not matched at the other sites, where entrance orientations are to the south, east or south-east. The wall of the Loch Shurrery house was fairly thick and the excavation suggested that it was complex, while the entrance passageway was quite long. The existence of door checks is also an unusual feature and may relate to the entrance structures of brochs and other substantial roundhouses. Two samples of charcoal from the hearth inside the hut circle were submitted for radiocarbon dating: the determinations produce calibrated ranges (at 2-sigma) of 346-4 cal BC and 341 cal BC-1 cal AD. It is likely that most of the excavated, undecorated pottery is also Iron Age, part of a broad tradition of very coarsely tempered pottery. Not-withstanding evidence of extended occupation, the whole period of construction and occupation may have occurred within the Iron Age. 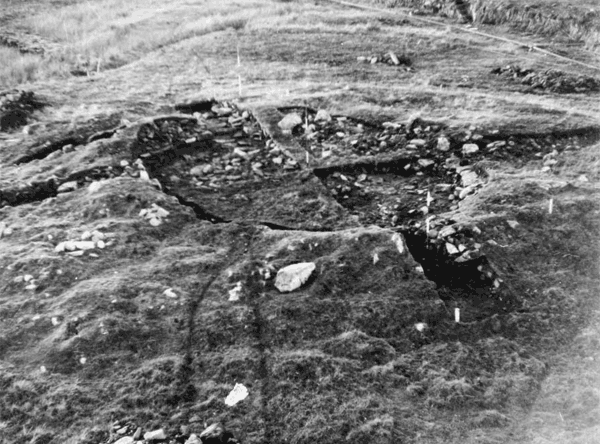