The excavations at Meadowend Farm, Clackmannanshire (NGR: NS 9280 9040) produced evidence for occupation at various times between the Early Neolithic and the Middle to Late Bronze Age. Significantly, it yielded the largest and best-dated assemblage of Middle Neolithic Impressed Ware yet encountered in Scotland, comprising at least 206 vessels. Episodes of Early to (pre-Impressed Ware) Middle Neolithic activity were represented by pits and post holes scattered across the excavated areas, some containing pottery of the Carinated Bowl tradition and some with charred plant remains; three blades of pitchstone and one of non-local flint were also found. The phase of activity associated with the Middle Neolithic Impressed Ware pottery (c 3350‒3000 cal BC) is represented mostly by clusters of pits, some containing hearth waste and/or charcoal, charred cereal grain and burnt hazelnut shell fragments. A stone axehead and a broken roughout for an axe- or adze-head were associated with this phase of occupation. There then appears to have been a hiatus of activity of around a millennium before occupation resumed. One Early Bronze Age structure and pits dating to around 2000 cal BC (plus undated pits containing possible Beaker pottery) were succeeded by four Early to Middle Bronze Age roundhouses dating to c 1750‒1300 cal BC and a large pit containing parts of at least 37 pots, and subsequently by two large double-ring roundhouses, an oval building, and ancillary structures and features dating to the Middle to Late Bronze Age, c 1300‒900 cal BC. There is also evidence suggesting low level activity during the Iron Age, plus two medieval corn-drying kilns. Environmental evidence indicates cereal growing from the earliest period, and local woodland management. This publication focuses on the Neolithic and Bronze Age periods and discusses the significance of this site for our understanding of these periods, and particularly for the Middle Neolithic, in Scotland. 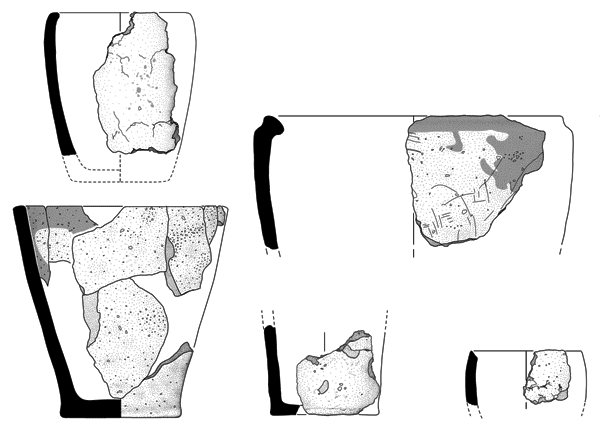