Dere Street Roman Road was strategically important to the Roman army. It was built in the late 1st century ad to enable the advance of the Roman Army, commanded by Agricola, into the hostile territories of what is now Scotland. This eastern arterial road linked the Roman legionary forts of Eburacum (York) and Inchtuthil near Perth, and continued to be used through the medieval period, its longevity of use standing as a testament to Roman engineering and road construction. In 2007 an archaeological excavation made an exciting discovery which sheds new light on construction techniques employed by Agricola’s legionnaires and demonstrates their adaptive ability to use whatever local resources were at hand to engineer a solution for crossing difficult terrain. As an archaeological response to a proposal to extend the existing Dun Law Windfarm, excavations were conducted by CFA Archaeology Ltd across what was believed to be the course of Dere Street running across Dun Law, a prominent, but wet and boggy, hillside in the Scottish Borders (NGR: NT 4643 5663). The excavations discovered a surviving section of the road, which at that point traversed a palaeochannel by means of a latticework of logs and a mat of branchwood. 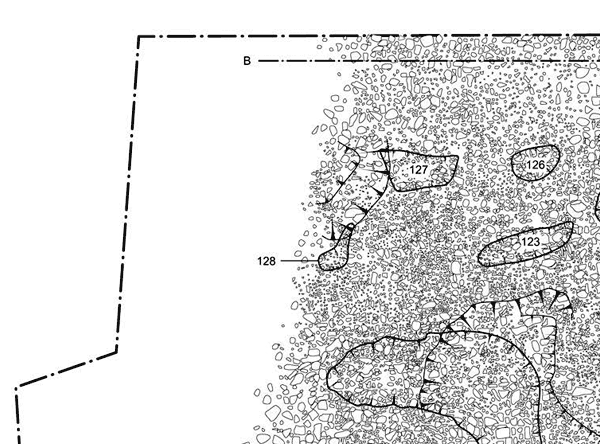