Trial trenching carried out by CFA Archaeology Ltd in 2006 to the north of Lockerbie Academy (NGR: NY 13398273) identified four areas of archaeological significance covering a timescale from early Neolithic to post-medieval periods. The earliest site identified was the remains of a Neolithic timber hall, which was situated on top of the flat plateau towards the northwest end of the site (Area A). Pottery recovered from the Neolithic structure was of the Carinated Bowl ceramic tradition. At the summit of the rounded knoll in the centre of the area (Area D) a Bronze Age phase consisting of a cremation and inhumation cemetery enclosed by a possible ring-cairn was identified. The Bronze Age cemetery included a Collared Urn and a copper alloy dagger of Butterwick type. At the base of the rounded knoll, the remains of an Early Historic timber hall were identified (Area C). This Anglian timber hall reoccupied the site of a post-built structure, which was interpreted as a timber hall, possibly belonging to an earlier British tradition. Radiocarbon dates taken from the primary fill of two of the post-holes of the earlier structure gave dates which are broadly contemporary with the dates obtained for the Anglian hall, suggesting that the post-built structure immediately preceded it. A corn-drying kiln was identified cut into the same knoll as the Bronze Age cemetery (Area D) and has been dated to the late medieval or early post-medieval period. A segmented ditched enclosure was located towards the north-east end of the site (Area B), but the poor survival of this feature combined with a lack of finds and palaeobotanical evidence means that it remains undated and poorly understood. 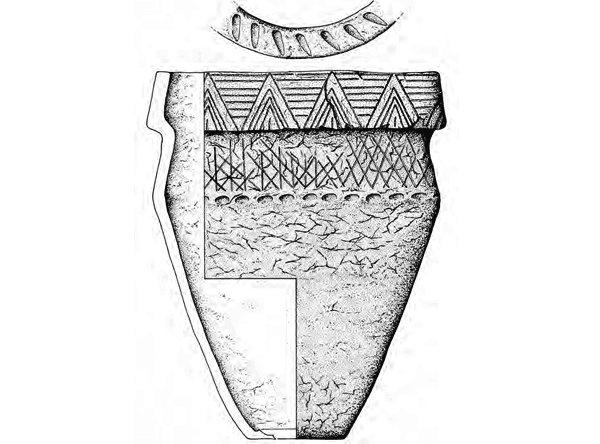